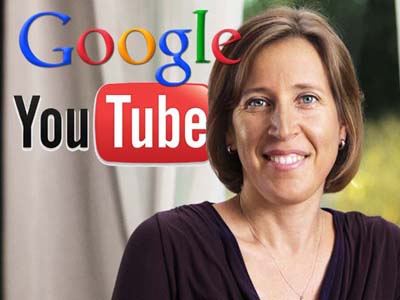 Every one of us is aware about Google and YouTube. But very few of us might have heard about the driving force behind them. Meet `Susan Wojcicki’- the 47 year lady who changed the course of Internet history. One of the most successful personalities in Google as well as You Tube.

Susan has been with Google since the start. In fact Google has started functioning in the garage of Susan. That was the year 1998 and Susan was the 16th employee of Google. She went on to become the first marketing manager of Google by the next year.

Susan grew up along with Google becoming its vice-President of Advertising and Commerce. It was Susan who developed the idea of turning googled words into money. She went on to develop Ad Sense which became the second largest revenue source for Google.

YouTube was relatively a small site in 2006 and Google has its own video service called Google Video. But Susan believed in the potential of YouTube and insisted Google to acquire it. It was Susan who spearheaded the purchase of YouTube by Google and is now the CEO of YouTube.

It was Susan who thought of attaching Google search engine to every website. Susan initially encouraged the universities to include a Google search bar on their websites. The idea worked out and was followed by most of the websites on earth.

Susan and her 5 kids

Susan was married to Dennis Tropper in 1998. That was almost 20 years of blissful marriage. She has not just one or two but... 5 kids! Many thought that Susan would be leaving her career after becoming a mother. But she always felt that family and career are complimentary to each other.

Susan might not be a public personality. But she was surely recognised by the media. She was often included in the list of influential people. TIME has included Susan on ` 100 most influential people in 2015’. She was considered as the most powerful women on internet and advertising.