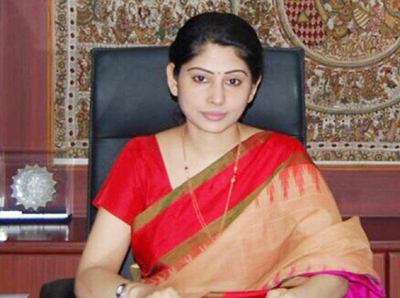 You may have seen her photos on Face Book. You might have seen her clippings on the Channels. Most of us might immediately recognise her as a young IAS officer. But Smita Sabharwal is not just any ordinary officer. Watch out...

Daughter of a Colonel: Smita is daughter Colonel Pranab Das, a retired army officer. Pranab Das used to travel various parts of the country on duty and so does his family along with him. Smita has reached Hyderabad by the end of her schooling days. She has completed her 12th standard in St. Ann’s, and graduated in Commerce from St. Francis Degree College.

Not just a father: Smita’s father has carefully guided her career. He advised her to take commerce stream during the 12th standard. Smita was initially very angry about the push. But she was more than happy when she bagged the first rank in the all India ICSE Class 12 exams. After completing B.Com, it was her father again who suggested her to pursue the civil exams immediately.

Excellence in Civils: Smita cleared the Civil Services Examination by a very young age of 23. She was probably one of the youngest women to clear the exam at the first attempt. And she has not just cleared it, but made a blast with an all India 4th rank.

Not just looks: Many have mistaken her to be just a girl with good looks. But Smita gave a tight slap to their narrow minds. She excelled in every post she was appointed. Sub collector of Chittoor, DRDA director of Kadpa, Municipal Commisioner of Warangal... she made her mark in every field she has entered.

Daring:  In 2011 Smita has been appointed as Collector of Karimnagar where she has excelled at par. Smita has run various programs like “Amma Lalana” and “Praja Vaani”... which has led Karimnagar to be awarded as best district in PM's 20 Point Programme. Smita was later appointed as Collector of Medak. Her efficiency has led Telangana CM KCR to appoint her as Additional Secretary in his office.

And Dashing: Smita is the first lady IAS officer to be appointed to the Chief Minister’s Office. But some are not happy about it. A column appeared in Outlook magazine with derogatory remarks about her. It was alleged in the column that she was chosen based on her looks. You can’t expect Smita to bear such remarks. She immediately sued the magazine. Outlook has immediately apologised for the misdeed.

Doesn’t miss life: Smita might have excelled in her academics. But she has never missed her life. Smita claims that she used to study for only 6 hours a day and spend an hour in sports. She loves Paradise Biryani and is interested in social service. She was married to Akun Sabharwal, IPS officer who is also from the Telangana cadre.

Let’s wait to hear many more achievements from her.