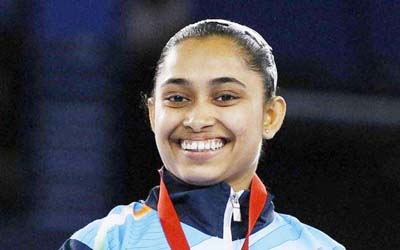 Dipa, the ultimate gymnast hails from the North Eastern state of India Tripura, which is far behind development. But that didn’t stop her from reaching the skies. She started practising gymnastics when she was just 6 years old. Dipa and her father knew that they had a goal to achieve in life.

In 2007, she won the Junior Nationals in Jalpaiguri, when she was just 14 years old, and that was just the beginning. Since 2007, Dipa has won 77 medals at various levels. 67 of them are gold!

Dipa was one of the five women in gymnastic history who has achieved a feat called PRODUNOVA. This feat consists of a front handspring and two front somersaults. Produnova is so dangerous that some people were even demanding to ban it. Because one can always land on his neck and break his spine while trying to achieve Produnova. But Dipa just wanted to achieve the feat.

In 2014, Dipa became first Indian women to grab a medal in Commonwealth Games, by winning a bronze at Glasgow, and she was second Indian after Ashish Kumar to achieve the task.

After her victory in Commonwealth Games, people began to recognise the ability of Dipa. Even the sports icon Sachin Tendulkar lauded her for her achievement, and said that he was proud of her.

In 2015 Dipa became the first ever Indian to qualify for the final stage of World Artistic Gymnastics Championship. She missed the bronze by a feather by remaining at the fifth position.

Dipa now creates another page in the history of Indian sports by getting qualified for the upcoming Olympics in Brazil. She would now be the first Indian women to enter a gymnastics competition in Olympics and would also be the first Indian to achieve the feet after a gap of 52 years. It was only in 1964 that Indian gymnasts were qualified to enter Olympics.