Home
Stotralu
Slokas in Praise of Lord Anjaneya with Meanings

Slokas in Praise of Lord Anjaneya

Sri Maruthi (Son of Wind God), the terror to demons (Rakshasas) is present wherever praise of Sri Rama is sung, with joyous tears in His eyes and folded hands over His head. To Him we offer our salutation (Namaskarams).

Anjaneya, the delight of his mother Anjana Devi (Anjanaanandanam) and the destroyer of the demon king Ravana's son Aksha, dispeller of the grief of the daughter of king Janaka (Jaanaki s'oka naas'anam), I salute(Vande) that heroic (veeram) monkey-leader Hanuman (Kapees'am), the source of terror to Lanka (Lanka bhaankaram).

My obeisance to Anjaneya with palms joined (tam praanjaliranjaneyam), who having leapt across the deep sea (salilam) in a playful manner (sa leelam) and picking up the fire of grief of Jankakumari (janakatmajaayaah s'oka vanhim), burnt Lanka with the very same (tenaiva) fire of grief.

Sri Anjaneya sprang across the ocean effortlessly, as if crossing a Cow's hoof (goshpathy) and crushed many ogres, like mosquitoes. My obeisance(vande) to Son (aathmajam) of wind God (Anila) who shines as a pendent on great Ramayana necklace (Mahamaala).

Son of Anjanadevi (Aanajeyam) and the wind God (pavamaana nandanam) who is deep red-faced (ati paatala aananam) and who's body radiates like that of the golden mountain (kaanchanaadri Kamaneeya Vigraham) and has the Paarijaata celestial tree as His abode, I bow down with reverence (Bhaavayaami) Thee.

He who is the repository of immense power with a body glittering like a mountain of gold; who is verily the jungle-fire to incinerate the jungle of demons; the exalted scholar, the mine of all virtue and the master of apesand monkey(vanaramam)- I bow in reverence to such of the wind god, Lord Hanuman, the nenowed ambassador of Lord Rama.

He, who tried to devour the rays of the Sun in one stroke, who crossed the sea as if it is the distance between the front and back legs of the cow , who considered Ravana (Dasagriva) as trifle like grass and ignored him, - I pay obeisance to that Anjaneya.

He, who could achieve that which is impossible, who could do even the most difficult things- Swamin! Hey Swami- Please tell me: Is there anything that you cannot do? You are the ambassador of Lord Rama, you are the ocean of ompassion; Prabho (Prabhu in Sanskrit has the meaning - One who can do, undo and do in another way) please help me in discharging my duties and responsibilities.

Hey Anjaneya ! who is the giver of all good things, who protect from all adversaries, who is the repository of immeasurable love and compassion, I pay my obeisance to you.

May Lord Hanuman, who got rid of the sufferings of Sita, who brought out succinctly the character and special qualities of Lord Rama, who brought down the fame of Ravana, standing before me, protect me.

Let veera Sriman Hanuman lives in my mind and guide me in every aspect and lead me to victory. This Hanuman, known as the Ramadootha - the messenger of Sri Rama - was born to the Wind God Pavana, the Vayu, his eyes are light yellow in colour, has long hair. He is the one who helped Sita to get rid of her sorrow by conquering the Dasamuka rakshasa, Ravana; gave life to Lakshmana when he was lying unconscious bringing the herbal mountain itself for this purpose (as he had no time to search and select the proper medicinal herbs) and this is the same Hanuman who showed that he has the capability of crossing the Ocean.

My salutations to this Hanuman who always brings subham - everything that is good - for his devotees and eliminates the bad and the evil. He removes even the traces of bad thoughts and deeds from his devotees. i.e he makes them pure in words, thought and deed. With eyes yellow in colour, he is said to be the best among the kapi- the monkeys. He is the one as bright as koti Suryas and koti Chandras (million Suns and Moons) who went in search of Sita. He was a threat to the island of Lanka, but for his devotees he is the one who bestows everything. He was praised by Sugriva. Being the messenger of Rama (the descendent of Kakusth dynasty) he is revered by all Devas including Indra. 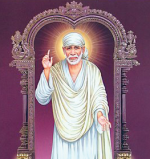 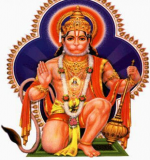