Home
Beauty Care
Is Your Hair Turning Grey Because Of Stress!

Is Your Hair Turning Grey Because Of Stress! 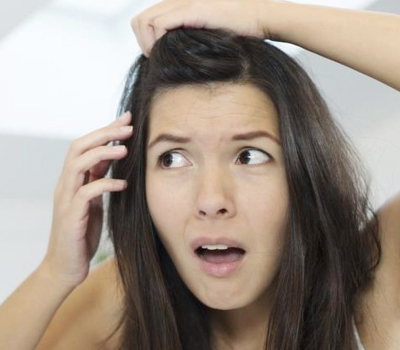 Hair is something both men and women love to take care of and also flaunt new styles will a lot of excitement. But one thing which sends distress signals across is the discovery of a grey strand in those lustrous locks! Research says that the first silvery strands of hair normally appear around age 30 for men and 35 for the women. However for some people, graying can start in as early as high school, and for some as late as their 50s. There could be various reasons in play for this. Initially, hair is white. It gets its natural color from a type of pigment called melanin. The formation of melanin begins before birth. The natural color of our hair depends upon the distribution, type and amount of melanin in the middle layer of the hair shaft or cortex. Hair has only two types of pigments: dark (eumelanin) and light (phaeomelanin). They blend together to make up the wide range of hair colours.

There are various reasons for hair turning grey. Some of the most prominent ones are, you’re exposed to cigarette smoke, your hormones are changing, your environment is polluted, you’re super stressed, and your age. You may not be ready for the grey hair, but your hair is. Melanin production, what gives hair its pigment, decreases with age. For every decade after you turn 30, your risk of going gray increases 10 to 20 percent, according to research. So while some people may be able to maintain their natural hair color for longer, it’s inevitable. In time, everyone’s hair goes grey.

A lot of general health practitioners have reported that clients who have reported to be living under stress for a few years have accelerated graying processes. Scientists surmise that while hair graying is genetically outlined, stress and certain lifestyle choices can give you a variation of about plus or minus 10 years. Since stress causes hair loss, it's possible that losing some pigmented hair can make those gray hairs more noticeable. Our heads contain hundreds of thousands of follicles, and each follicle is charged with producing one hair. Cells known as keratinocytes build the keratin that becomes our hair, our skin and fingernails are also composed of keratin.

Before hair emerges from the follicle, though, other cells known as melanocytesinject a pigment called melanin into the keratin. When our hair turns gray, it's due to lowered amounts of melanin, and when hair is completely white, our hair lacks melanin altogether. Grey hair caused by ageing is the result of exhaustion and loss of melanocyte stem cells, and stress could cause similar results. There are two prevailing hypotheses. The first is that aging wears down your DNA, somehow inhibiting the production of the cells called melanocytes that produce melanin. Most of the studies supporting this hypothesis have been done in mice, however, and so far haven’t closed in on a complete explanation of how this would work. Whatever could be the scientific results of it. Its always more healthier to stay happy and stress free. You never know you are warding off various beauty issues by it and would be leading a healthier life!