The complete life of Jayalalitha 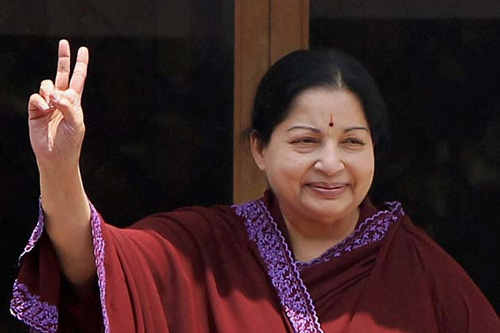 Jayalalitha was born in a highly influential family. Her paternal grandfather, Narasimhan Rengachary, was a court physician to Maharaja of Mysore. The huge wealth amassed by him has indeed spoiled his son Jayaram- the father of Jayalalitha.

Jayaram was addicted to all kinds of habits that deteriorated his health. The wealth amassed by Jaya’s grandfather was squandered by Jayaram for his addictions. Finally he died in mysterious circumstances in 1950, when Jayalalitha was just 2 years old.

Jayalalitha and her mother were left in shock after the demise of Jayaram. Jaya’s mother Vedavalli took clerical positions in Bangalore to support her family. Later on, she moved to Madras where her sister Ambujavalli was working as Air Hostess and Film Actress.

Vedavalli has changed her name into Sandhya and started acting as supporting actress in Tamil and Telugu films. Though Jayalalitha started learning Bharatanatyam from the age of 3, neither Sandhya nor Jaya were interested in her entry into films.

Jayalalitha was 12 years old when leading Tamil actor Shivaji Ganesan saw her performing classical dance. He immediately predicted that, with such beauty and charm, she would be great actress. But both Jaya and her mother didn’t like the prediction. Jaya wanted to become a lawyer!

Though Jaya was studying hard to fulfil her aim to be a lawyer, fate gave her a complete turn. B.R.Panthulu famous South Indian director has once saw her immediately casted her in his next film. That was a Kannada film called ‘Chinnada Gombe'!

Jaya acted in ‘Chinnada Gombe’ during her holidays and has no intention to continue her film career. But, huge success of ‘Chinnada Gombe’ and her financial constraints forced her to stay in films forever.

Jaya’s first movie in Tamil was Vennira Aadai (1965). That film was given an ‘A’ certificate due to scenes on Jaya. But Jaya may not have been allowed legally to watch the film, because she was just 17 years old by that time. She became the first heroine to appear in skirts in Tamil films

Jaya started her marathon in Telugu movies in 1965. Her debut Telugu movie was ‘Manushulu Mamathalu’ with ANR as lead actor. Jaya has acted in 28 Telugu movies and all of them were a hit. She even has won Film Fare award for her performance in ‘Sri Krishna Satya’.

Jaya was introduced to MGR on the sets of ‘Aayirathil Oruvan’, the first film in which Jaya and MGR were casted together. It was in the year 1965. MGR was 48 years old and Jayalalitha was just 17. They were rumoured to live in together as their career went forward.

MGR introduced Jaya to politics and made her a prominent leader in the AIADMK party founded by him. She was even sent to Rajya Sabha in 1984 due to her fluency in English. But his death in 1987 has changed everything for ever.

After the demise of MGR, AIADMK was split into two groups... one led by MGR’s wife Janaki and the other faction was of course led by Jaya. Jaya later overpowered the other faction and became the Chief Minister of Tamil Nadu in 1991.

It wasn’t an easy task for Jaya to handle the politicians in Tamil Nadu. She was once insulted on the grand stage of Tamil Nadu assembly by the mob of MLA’s who has even torn her sari. Jaya has even accused Chenna Reddy for misbehaving with her while he acted as a governor of the state.

Though being a successful chief minister, Jaya has often faced the allegations of corruption. She has even got infamous for being first chief minister in India to be disqualified from office due to conviction in a disproportionate assets case. But she later regained the position as she was acquitted by the high court of Karnataka.

Jaya now holds the post of CM of Tamil Nadu for fifth time. She was crowned as the leader of the state for second consecutive time. It was a rare record that was broken after 32 years. The love of Tamil Nadu people and loyalty of her party members seems to have made this possible.